The recital is divided into two parts. Like a musical rainbow, the first presents some of the most representative composers from Spain and Latin America. The second gives the audience an international panorama of the contemporary music for guitar, with a varied sample of styles.

The first group begins with Sueño (Dream), where Francisco Tárrega (1852-1909), uses the difficult trémolo technique; this composition is one of the best examples of Tárrega's Romantic aesthetics. The next, Recuerdos de Aranjuez (Memories of Aranjuez), is a special revision by Maestro Soler of the famous Adagio & Cadenza from Concierto de Aranjuez, by the great composer Joaquín Rodrigo (1901-1999) followed by the Danza by Antonio Ruiz-Pipó (1934-1997), from his Canción y Danza nº 1. This group close with Mozartiana Nº 1 (Opus 5) by Maestro Soler (b. 1949), which draws its inspiration from Mozart's, Ave Verum Corpus and the city of Salzburg.

The next section opens with the popular dance, of Incan origin from the Bolivian altiplano, Huayno, where sometimes the guitar sounds like the charango. Then, the rhythmic Brejeiro by Ernesto Nazareth (1863-1934), a sort of tango with a peculiar flavor of samba following the popular Paraguayan polka Pájaro Campana (Bellbird), by Ampelio Villalba (1890-1937). This group ending ends with the popular Paraguayan dance Chopí, from the Suite Las Tres Palomas by Pablo Escobar (1900-19??), a striking combination of music for harp.

The last part of the first set, opens with the sensitive piece by Manuel María Ponce (1882-1948), Scherzino Mexicano continuing with the famous Berimbau, popular bossa by the Brazilian Baden Powell (1937-2000), with recollections of the carnival music. This part ends with the festive and rhythmic Batucada by Isaías Savio (1900-1977).

The beginning of the second part half honors the great Paraguayan composer Agustín Pío Barrios Indio Mangoré (1871-1942), with his emotive Andante Religioso from La Catedral. Next, by English composer Benjamin Britten (1913-1976), the March-Like from his Nocturnal, set of variations about the Dowland's First Book of Songs or Ayres of Four Parts (1597). This section continues with Singing the Saltarello, by Maestro Soler, piece based on the Saltarello by Vincenzo Galilei (1520-1591), father of Galileo, where the composer presents the guitar like small choir, singing the Saltarello. The following piece is La Salle de Billard from Le Pavillon de Banlieu, where the French composer Olivier Bensa (b. 1951), tries to imitate the pool game (pay attention to the last ball). Fruit of an original inspiration, the Prelude & Air from the Quatre Pièces Brèves, by Swiss composer Frank Martin (1890-1974), is based on ancient popular French dances. Then, the Spanish composer Salvador Bacarisse (1898-1963), with his virtuous Passepied nº II. Ends this section the PolishFrench composer Alexander Tansman (1897-1986), experimenting the Baroque style in his contemporary Danza Pomposa.

The English composer John William Duarte (1919-2004), opens the next set of selections with a jazz-like composition, Sua Cosa, written in Wes Montgomery's style, following the popular hymn They Must Know by American composer Harry Dixon Loes (1892-1965). The next piece, Mill Grove Farm, by Italian guitarist and composer Giovanni Unterberger (b. 1949), brings to mind the purest bebop style, closing this group the swing Bluefinger by American composer Jerry Reed (1937-2008), who drew his inspiration from Chet Atkins Alone.

The program ends with a piece by Maestro Soler, Lady M, Little Rolling Stone, where the composer combines the classic stereotypes of Blues and Rock, with the newest and most surprising effects that can be drawn from the guitar. 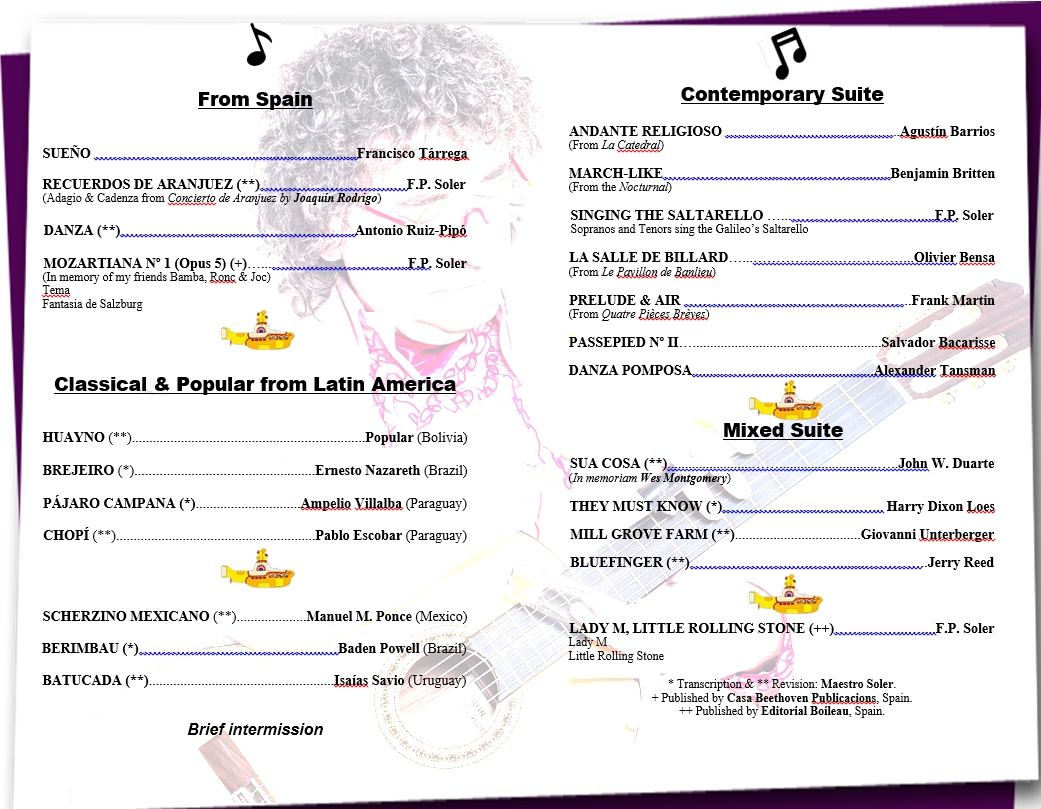 Riddle of the Guitar

In the round
crossways,
Six maidens
are dancing.
Three of flesh
and three of silver.
Yesterday´s dreams haunt them
but they are held embraced
by a Golden Polyphemus:

García Lorca, attributes to the guitar
occult powers,
and returns again and again
in his poems
to the image of its strings
spread out like the arms
of Polyphemus,
waiting to trap our souls